What are the Best Use Cases Of AngularJS Framework

AngularJS is one of the most versatile and widely-known frameworks that are currently available. Google introduced this tool in the year 2012. In short, the angular provided a scalable infrastructure that supported Google’s largest Web and mobile applications.

Recently, we wrote an article on the comparison of two of the most popular JS frameworks, i.e. React vs. Angular, which received a great response. In this article, we will be discussing points about angular js, including best use cases for angular, reasons why angular is an excellent option as a technical solution, advantages of angularJS, and many more. So let’s start with the basics of this JavaScript framework.

AngularJS is a structured JavaScript framework that creates dynamic single-page applications, also known as SPAs. Because it is a client-side framework, it is also supported by multiple platforms. All of the functions and commands of the AngularJS framework utilizes the code template that is written in the HTML script.

Angular JavaScript first made its debut in the year 2010 as a Web development platform that was built into typescript that further provided Web app developers with effective and robust tools for developing client-side Web apps. Over the years, we have witnessed the evolution of angular js and how single-page applications gradually gained popularity in different industry verticals.

But if we look at the period from 2016 to 2018, there has been significant growth in the Angular field, and the fact that Google introduced many back to back updates just added more to this situation. 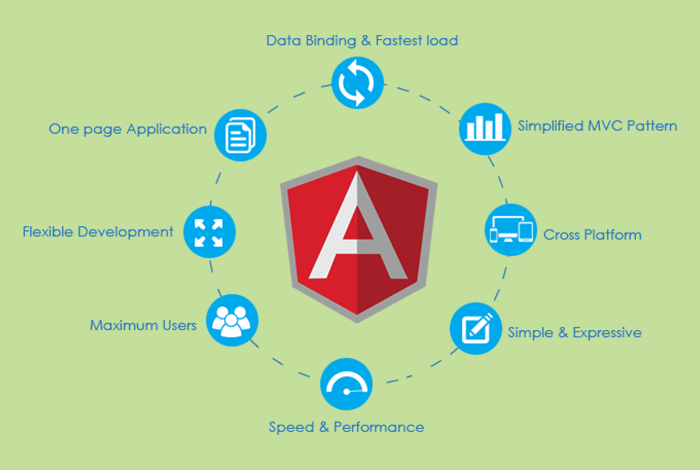 The above image shows some of the core features of the AngularJS framework, such as flexible web app development, data binding,  cross-platform support, basic MVC (Model-View-Controller) pattern, etc.

Below are some of the main reasons why you should pick the Angular JavaScript framework as your project’s next technical solution:

Command Line Interface, also known as CLI, which can also be stated as one of the most cherished features by a large number of angular developers. The features of CLI in angular js can automate the entire process of development, which will further other connected processes easy to run. Some of these processes are app initialization, platform configuration, application development, etc.

Apart from this, the Angular CLI also allows app developers to build a new Angular project by adding extra features to it and running end-to-end unit tests with just a few basic commands. It not only increases the code quality of the project but also elevates the development factor.

The angular elements come into existence along with the Angular 6 version, where application developers are allowed to easily add customized elements to any Web application that is being developed by using other environments like React, JQuery, or even Vue.

AngularJS documentation can be described as a detailed one as it includes all the essential information and details regarding the development process where developers can find all necessary information without any need to ask their peers.

Due to this, the app developers working on a particular project can come up with technical solutions at a much quicker pace and proceed to resolve emerging issues without any delay.

Another core feature of angular development includes an Ivy Renderer that also comes with an update of the sixth version of AngularJS. In simple words, this feature translates the components as well as the templates of the app into the JavaScript codes that can be directly displayed in a Web browser.

Here, one of the primary characteristics of this angular tool is the ‘tree shaking’ technique. This technique can be further explained as when the unused code is removed during rendering by Ivy itself so that the remaining code can be compact and clear at the same time. The feature of Ivy renderer is important because it helps the web apps in loading faster.

The Angular Material can be labeled as the collection of Material Design elements that are somewhat optimized according to the Angular framework, making it easy for application design developers to integrate UI (User Interface) components on the platform.

The term dependency injection can be defined as a process in which one object provides its set of dependencies of another object. These are the dependencies that will explain the fact of how different components are connected by showing how changes made in one part or component of the code affect the other parts of the code. 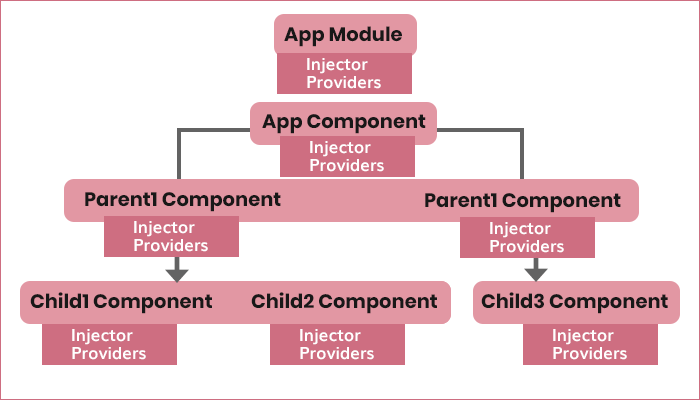 In addition to this, we recommend using the feature of dependency injection as it converts the code into a format that is more readable and easily maintainable. This option also reduces the extra time that is usually spent in the testing phase and eventually leading to reduced web development costs.

In the case of server-side rendering, the angular universal can come in quite handy and even provide several benefits to the Web-based or mobile project. For instance, it minimizes the page load time while improving the overall speed and performance on different types of mobile devices.

By facilitating the web crawlers, you can effortlessly boost the total number of users that you receive on your application or web page, thus increasing ranking in the search engine results.

8. Backed Up By Google

A significant point that needs to be mentioned in this list of core functionalities of the AngularJS Web application framework is the major amount of support that the angular tool is receiving from a major tech organization like Google. A large number of app developers believe that the support by Google makes angular platforms more reliable and trusted.

The rise in the usage of AngularJS architecture and angular concepts encouraged in the addition of a ton of tools and components that can be used in the application development process with angular.

The AOT compiler, also known as the Ahead of Time compiler, can convert the typescript and HTML format into JS, i.e. JavaScript form. This process itself will take place in the development stage, which further means that the code will be compiled before the browser even loads the page, making it a more secure option in comparison to the JIT (Just in Time) compiler.

These were some of the most powerful features that can probably answer your question on why to choose angular and implement the advantages of angular. With the help of this wide range of functionalities, many businesses opt for angular as their development platform.

Businesses That Benefit From Angular

Here are some of the different types of projects that can highly benefit from angular Web development and grow their business:

Progressive Web apps, a.k.a. PWAs were first introduced in the year 2015 by Google itself, and this was the time when angular developers saw real potential in progressive Web applications. The version of Angular 5 comes with inbuilt support for PWAs to make the process of building a progressive Web app less complicated.

Another type of project that benefits by using the AngularJS concepts are the dynamic apps, i.e. the applications that consist of dynamic content. As we already know, the angular platform was created with the initial objective of building SAPs (Single Page Applications), and due to this, there are many app development tools available to us.

We are well aware of the fact that Angular JavaScript contains typescript will further consist of all the features that are required to build large-scale app development projects.

Some of these features are advanced refactoring, navigation, autocompletion, etc.. Apart from this, the architecture of angular design also makes the code easy to maintain and reuse over different platforms. 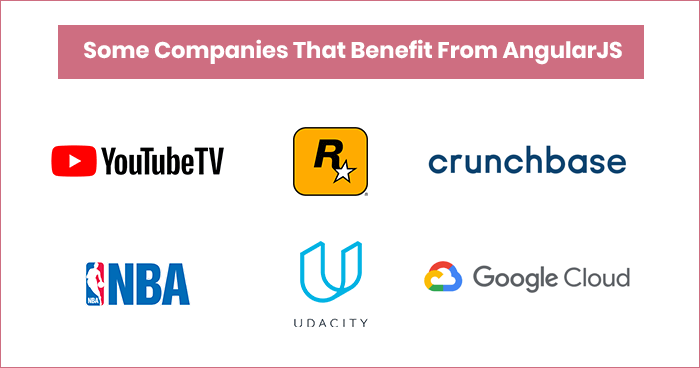 The above image shows the names of the leading companies that use angular technical solutions such as Blispay, Crunchbase, Youtube TV, Google Cloud, Udacity, and many more.

Below are some projects that do not require angular development and cannot be listed as AngularJS use cases:

When it comes to projects that are short-term in nature, using angular doesn’t seem to be a great option. It is because startups have a limited number of resources at their service, and the complexity level of the framework can be challenging to handle by a small group of app developers.

The websites that are lightweight and consist of static content may not be ideal for the use of the angular framework. As mentioned above, angular can be an appropriate option for dynamic applications, but that’s the same case for static content. If a developer uses angular for a small project, then implementing angular will only increase the overall size of the website and raise many other complications.

Microservice approaches are somewhat similar to small-scale projects that are not considered to be efficient with angular JavaScript Web development. So make sure to avoid using AngularJS for applications that include microservice development and design approaches.

If you are an angular app developer, then you might already know that angular cannot be labeled as being SEO-friendly. Thus, making it a hard choice to use in case of websites that are optimized as per the search engine optimization(SEO) techniques. If not, then there will be a constant requirement of additional efforts in your website development project.

Where Does Angular Lacks Behind?

Just like any other JavaScript framework, Angular too has its pros and cons and below are some of the widely known shortcomings of angular:

There’s no denying the fact that by using the angular framework, application developers face a lot of difficulties, especially with backward compatibility. There is also a complete segment of angular documentation that explains the migration-related details, which can even lead to some confusion.

As we have discussed above, when it comes to SEO, angular doesn’t have much to offer. It is one of the disadvantages that a lot of app developers even complain about because search engine optimization plays a vital role in today’s search engine results.

If we compare angular to other JS frameworks, we can see that in comparison, angular is much more complex to understand and also has a steep learning curve. Even though the architecture of angular is component-based, which makes the code more readable for the developer, the real issue occurs during the managing part of the set dependencies between these components.

Looking at the points that we have discussed above, we can conclude that the AngularJS web app development framework surely has a wide range of powerful features that gives Angular an edge over its competitors like React JS. Still, with that, there are some pros as well, which can not be taken out of consideration.

This is one of the primary reasons why many large-scale businesses opt for angular as their preferred choice for the web development platform.

We hope that with the help of this article, some of your doubts have been resolved regarding the topic of AngularJS.

Keep yourself updated with the latest trends in the world of app development by being a part of MobileAppDaily.

Aparna is a growth specialist with handsful knowledge in business development. She values marketing as key a driver for sales, keeping up with the latest in the Mobile App industry. Her getting things done attitude makes her a magnet for the trickiest of tasks. In free times, which are few and far between, you can catch up with her at a game of Fussball.

MobileAppDaily will help you explore the best service providers depending on your vision, budget, project requirements and industry. Get in touch and create a list of best-suited companies for your needs.