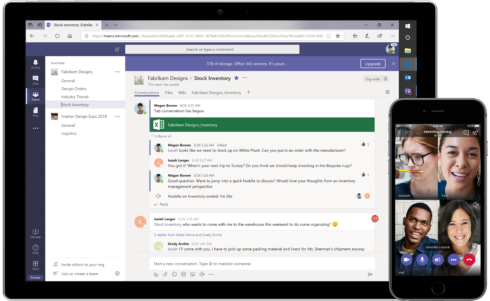 Microsoft Teams was already the largest collaboration platform before the pandemic hit, but its usage has skyrocketed since people started immediately working from home. Microsoft recently announced that there are 115 million daily active users in Teams.

Many of the features now are aimed at combating meeting fatigue and the fact that people are still feeling alone despite today’s collaboration tools, said Mark Rackley, chief  strategy officer at Microsoft technologies consultancy PAIT Group.

“It’s now the go to-tool in the Microsoft stack for collaborating remotely and doing calls and meetings and Microsoft has been making a ton of enhancements to Teams with ‘call-together mode,’ which puts people in different scenarios as if you’re in a classroom setting or a coffee shop,” Rackley said.

The feature, which came out in June 2020, shifts away from the traditional video-conferencing grid of boxes by bringing people together in a virtual space, creating an environment that users say has a profound impact on the feel of the video conference.

“People’s brains are used to being aware of others based on their locations, and the mirror effect makes it harder for the brain to notice eye contact irregularities. Those are some of the qualities that make it easier for everyone to tell how they are responding to each other,” Microsoft wrote in a blog post. “Together mode is built to give people the impression that everyone is looking at the entire group in a big virtual mirror.”

Also at Ignite this year, Microsoft announced that users can get to their home site from within Teams. The home site app provides organizations the ability to pin company-branded entry points to their intranet as a top-level app in Teams. It provides quick access to company-curated resources, important sites and news similar to those provided by the SharePoint App Bar in the web.

“They’ve just rolled out so many features since the pandemic hit, like you can raise your hand and there are meetings where you can see a person actually imposed on top of their screen rather than just sharing your screen to get that more personal feeling. Basically everything that they’re doing right now seems really pushing you to Teams,” Rackley added.  “It’s just an explosion of the ability to get into Teams and do everything that you can do from teams. So in Teams, ‘you’re always in Teams doing everything within Teams’ kind of one-stop shop type thing.”