What Is an API Gateway?

In this article, we are going to use Zato in its capacity as a multi-protocol Python API gateway – we will integrate a few popular technologies, accepting requests sent over protocols commonly used in frontend systems, enriching and passing them to backend systems, and returning responses to the API clients using their preferred data formats. But first, let’s define what an API gateway is.

Clearing up the Terminology

Although we will be focusing on complex API integrations later, to understand the term API gateway we first need to give proper consideration to the very term gateway.

What comes to mind when we hear the word “gateway,” and what is correct etymologically indeed, is an opening in an otherwise impermissible barrier. We use a gateway to access that which is in other circumstances inaccessible for various reasons. We use it to leave such a place too.

In fact, both “gate” and the verb “to go” stem from the same basic root, and that, again, brings to mind a notion of passing through space specifically set aside for the purpose of granting access to what normally would be unavailable. And, once more, when we depart from such an area, we use a gateway too.

From the perspective of its true intended purpose, a gateway letting everyone in and out as they are would amount to little more than a hole in a wall. In other words, a gateway without a gate is not the whole story.

Yes, there is undoubtedly an immense aesthetic gratification to be drawn from being close to marvels of architecture that virtually all medieval or Renaissance gates and gateways represent, but we know that, contemporarily, they do not function to the fullest of their capacities as originally intended.

Rather, we can intuitively say that a gateway is in service as a means of entry and departure if it lets its operators achieve the following, though not necessarily all at the same time, depending on one’s particular needs:

We can now recognize that a gateway operates on the border of what is internal and external and in itself, it is a relatively narrow, though possibly deep, piece of architecture. It is narrow because it is only through the gateway that entry is possible but it may be deeper or not, depending on how much it should offer to arrivals.

We also keep in mind that there may very well be more than a single gateway in existence at a time, each potentially dedicated to different purposes, some overlapping, some not.

Finally, it is crucial to remember that gateways are structural, architectural elements – what a gateway should do and how it should do it is a decision left to architects.

With all of that in mind, it is easy to transfer our understanding of what a physical gateway is into what an API one should be.

We can now define an API gateway as an element of a systems architecture that is certainly related to security, permissions, and granting or rejecting access to backend systems, applications, and data sources. On top of it, it may provide audit, data transformation, and caching services. The definition will be always fluid to a degree, depending on an architect’s vision, but this is what can be expected from it nevertheless.

Having defined what an API gateway is, let’s create one in Zato and Python.

In this article, we will integrate two frontend systems and one backend application. Frontend ones will use REST and WebSockets, whereas the backend ones will use AMQP. Zato will act as an API gateway between them all. 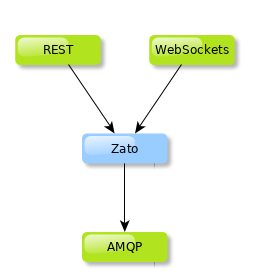 Not granting frontend API clients direct access to backend systems is usually a good idea because the dynamics involved in the creation of systems on either side are typically very different. But, they still need to communicate and hence the usage of Zato as an API gateway.

First, let’s show the Python code that is needed to integrate the systems into our architecture.

There are a couple of points of interest including:

In Zato, API clients access the platform’s services using channels. Let’s create a channel for REST and WebSockets then. 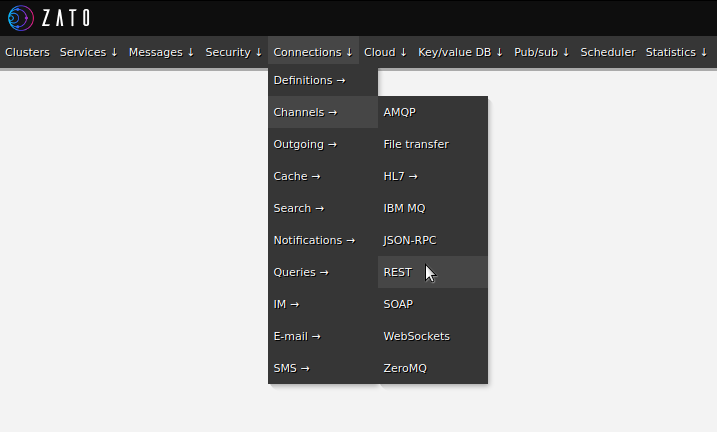 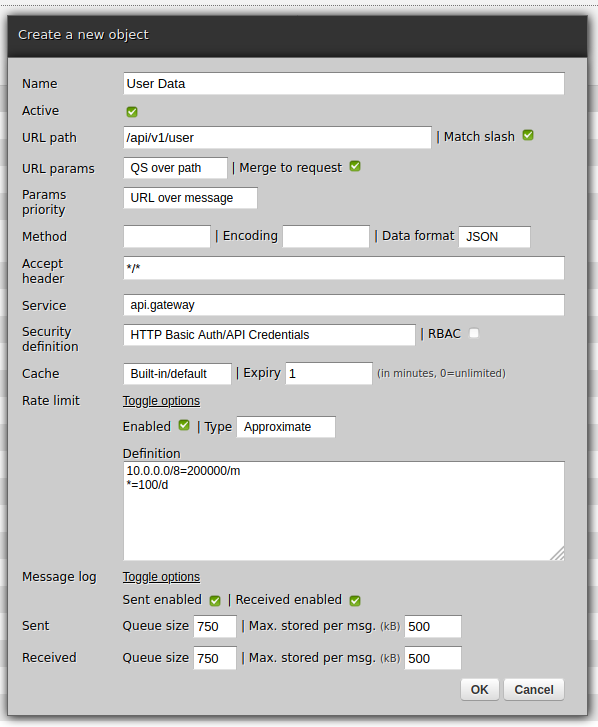 We create a new outgoing AMQP connection in the same way as so: 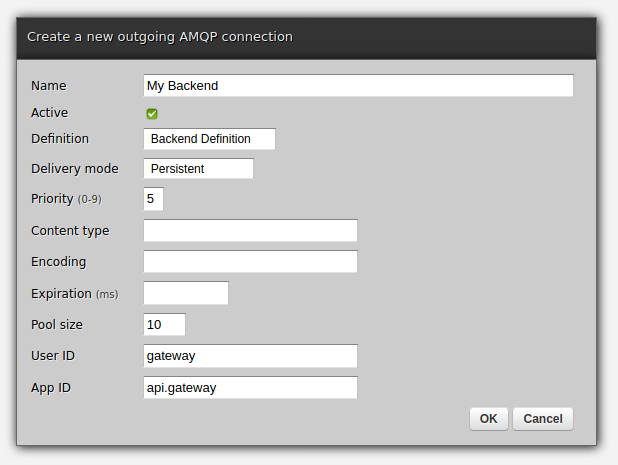 At this point, the gateway is ready; you can invoke it from REST or WebSockets, and any JSON data it receives will be processed by the gateway service, the AMQP broker will receive it, and API clients will have replies from the gateway as JSON responses.

Let’s use curl to invoke the REST channel with JSON payload on input.

Taken together, the channels and the service allowed us to achieve the following:

We can take it further. For instance, the gateway service is currently completely oblivious to the actual content of the requests.

But, since we just have a regular Python dict in self.request.payload, we can with no effort modify the service to dispatch requests to different backend systems, depending on what the request contains, or possibly what other backend systems decide the destination should be.

Such additional logic is specific to each environment or project which is why it is not shown here, and this is also why we end the article at this point, but the central part of it all is already done. The rest is only a matter of customization and plugging in more channels for API clients or outgoing connections for backend systems.

Finally, it is perfectly fine to split access to systems among multiple gateways; each may handle requests from selected technologies on the one hand, but on the other hand, each may use different caching or rate-limiting policies. If there is more than one, it may be easier to configure such details on a per-gateway basis.

If you are interested in building scalable and reusable API systems, you can start now by visiting the Zato main page, familiarizing yourself with the extensive documentation, or by going straight to the first part of the tutorial.

Be sure to visit our Twitter, GitHub, and Gitter communities too!