Migrating From .NET Framework to .NET Core: Tips and Tricks

Last year, when Microsoft announced that .NET Framework 4.8 would be the last major release of the full .NET Framework and given that .NET Core was already largely used for cross-platform development, we thought the time to migrate from Framework to Core had definitely arrived.

Besides being cross-platform, .NET Core has better performance, it has several enhancements over the .NET Framework, and it’ll be with us for many years to come. Also, it’s open-source and not proprietary, as Framework used to be.

After .NET Core 3.x, the next major release would be .NET 5 (jumping over “version 4” only as a cosmetic change and dropping “Core” for simplicity’s sake, since there won’t be a “Framework” anymore). The .NET 5 full-version would be arriving at the end of 2020, so we’d decided to start preparing our projects for what’s coming.

To help out anyone who might be going through the same, we decided to share things that have worked for us, as well as some lessons learned.

We’ve gone through the process, and we can split it into four main considerations.

A lot of migration processes will depend not just on your solution, but also on how your software is developed and released. So let’s dig in.

Think about your solution in .NET Framework. Most of the codebase is platform-agnostic and will work in any operating system. Some of it, however, isn’t and will work only on Windows. Before any migration starts, you’ll want to know which are your problematic libraries.

Microsoft has developed a Portability Analyzer tool that focuses on analyzing your code and giving you a thorough report afterward regarding the compatibility between your current framework and the selected target frameworks (something along the lines of what’s shown in the image below). 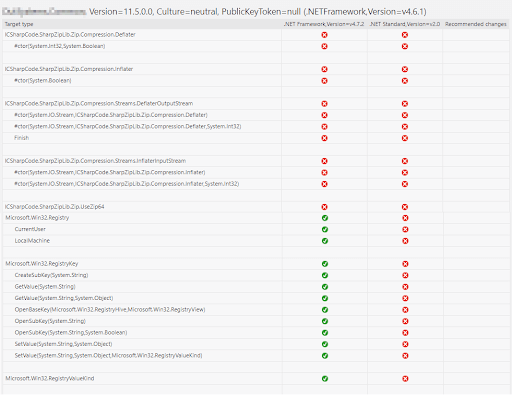 While the tool can give you a great starting point, don’t trust the results blindly. There are some false negatives, mostly regarding third-party libraries, so be sure to always validate with other tools, such as the .NET API Catalog that lets you check which .NET libraries are available and the Nuget alternatives for the ones that aren’t.

Migrating solutions with over 60 projects, some of them shared with other solutions, may be tricky… If you choose to do a direct migration from Framework to Core, you’ll have to do it completely, meaning that once you migrate one of the projects, all of them need to be in .NET Core. Since the codebases of .NET Framework and .NET Core are different, you cannot import Framework projects within Core projects and vice-versa.

If your software isn’t currently being distributed, you have a great opportunity of migrating in a single go. If, however, you have your software moving forward with ongoing development and releases, the one-go migration isn’t advisable.

At OutSystems, and specifically with our software Service Studio, with new development happening as we speak, we would need to make sure that:

In our case, it would be impossible to migrate everything at once since it would compromise our current solution. One way to go is the shared API between Framework and Core — shown in the image below. 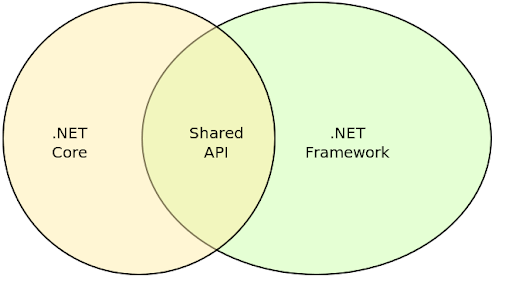 The Shared API (known as .NET Standard) is a subset of both the Framework and Core platforms, and it allowed us to have a more careful approach when migrating, by following these steps:

1. Divide the projects into two categories: those that only need some fine-tuning (easy to migrate) and those that need partial/full re-work, for example, projects with Windows Presentation Foundation (WPF) graphical components.

2. For projects that are easy to migrate:

The end result of each option is the same, but there’s a key difference between them. Multi-target always builds N framework versions, causing compilation to become slower. Also, you may end up with locked files due to N projects being built at the same time and accessing projects’ resources — this is why we have chosen the conditional building strategy whenever possible.

3. For projects which have either too many Windows-specific code, such as WPF components, or cumbersome code to migrate, such as SOAP introspection, you can keep them in .NET Framework while you define the strategy for porting them later on. You can also consider scratching them and starting a new one, based on other compatible libraries. When you do decide to port them, you’ll need to make new .NET Core projects where you start implementing their altered version.

4. Make a new .NET Core solution, where you’ll gradually import every migrated project. When the last piece of the puzzle fits you’re good to go and you’ll have your full software in .NET Core.

Tip: If you’re going to follow the multi-step strategy, you should also upgrade your projects which remain in .NET Framework to version 4.7.2. While you can still have .NET Standard projects alongside Framework 4.6.1 projects, it’s better to upgrade in our experience. It’s a trivial step most of the time and one which has the potential of saving you a lot of time due to frameworks’ incompatibilities — Microsoft also recommends it.

When you migrate a project to .NET Standard/.NET Core you’ll have to adopt the “Microsoft.NET.Sdk” csproj format. The process of changing your .csproj to SDK-style can be cumbersome, depending on the specifics of your project.

Here are the main differences (and some problems) that we have stumbled upon:

1. Files compiled and generated during the first build will be automatically added to the @(Compile) list because of the SDK-type csproj.

2. Files generated at compile-time by the Nth-build will be added to the @(Compile) list by the code in your .csproj where you explicitly include them.

To make this work, include the generated files only if they aren’t in the list yet:

However, yet again, you may encounter a problem. The included files may have their full paths, while files from @(Compile) have relative paths only. Ultimately, we ended up with this solution for these cases:

Also, note that if you’re generating typescript files at compile time that need to be embedded in the .dll, you’ll need to add this to the EmbeddedResource tag:

To convert .csprojs to SDK-style format, there is an easy-to-use tool that can greatly help you in this task: CsProjToVS2017.

For the migration of the code per se, there isn’t a lot of generic advice to give since each project has its specifications and its share of non-compatible code. At this point, you should have a pretty good idea of the problematic third-party libraries which aren’t cross-platform and you’ll be looking at the alternatives for each.

As an example, we did a small test to confirm that System.Diagnostics.Activity class wasn’t a problem. In fact, this namespace doesn’t exist in .NET Standard 2.0 but it exists in .NET Core and in a Nuget Package, via the System.Diagnostics.DiagnosticSource class. The test consisted of generating a .NET Standard 2.0 library using the referred Nuget Package and of later importing said library in a .NET Core console app. The results were the same when running the console app on Windows and Mac.

Thus, when a library does not exist in .NET Standard, you must ask yourselves “Does it exist in .NET Core and via Nuget?”, which is a more relevant question to answer before starting to look into alternatives for non-existing libraries. Remember, .NET Standard is an intermediate step and the ultimate goal is to migrate your software to .NET Core.

There’ll also be occasions where you won’t find a library that works for all operating systems and you won’t be able to free your code from some operating system-dependent conditional region. An example of such is the code to manage the permissions of File/Folders. As of this moment, you don’t have any library in .NET that’s cross-platform and thus you need something on the lines of:

In the future, .NET Core will probably present us with an abstraction that deals with this in the background, but for now, that’s how we managed to get over the issue.

To finalize, there’s a package available to install in your project which tells you while coding if a given method exists for all target frameworks that your project has selected. It may come in handy.

In the end, even if you do everything right and the code is compiling, the process can still break at runtime. This will probably be caused by one of two reasons: either a method from one of your Nuget references isn’t implemented for the operating system you’re working on (even .NET Core Nuget References have unfinished i.e. NotImplemented methods) or the implementation for that operating system is faulty while for other one is stable.

For those reasons, make sure that you run your tests against the migrated codebase in all operating systems that your application is intended to be distributed to: don’t expect to have a stable version of your application running on MacOS just because all the Windows tests were successful!

So this is what worked for us, and the many lessons learned. It wasn’t always easy, and it took us some time, but we eventually got there. We hope you get there too!

In the next article of the series, we show you the tools we used to successfully migrate to .NET Core. Take a look at Using AWS Porting Assistant to Migrate From .NET Framework to .NET Core.