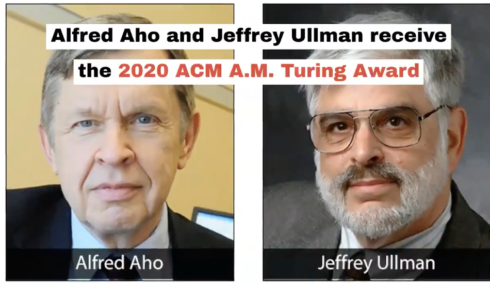 The Association for Computing Machinery (AMC) has announced Alred Vaino Aho and Jeffrey David Ullman as the 2020 ACM A.M. Turing Award winners for their work on fundamental algorithms and theory. The ACM A.M. Turing Award, also known as the Nobel Prize of Computing,” includes a $1 million prize with financial support from Google. According to the association, Aho and Ullman’s work underlies programming language implementation and has helped educate generations of computer scientists.

“The practice of computer programming and the development of increasingly advanced software systems underpin almost all of the technological transformations we have experienced in society over the last five decades,” said Gabriele Kotsis, president of ACM. “While countless researchers and practitioners have contributed to these technologies, the work of Aho and Ullman has been especially influential. They have helped us to understand the theoretical foundations of algorithms and to chart the course for research and practice in compilers and programming language design. Aho and Ullman have been thought leaders since the early 1970s, and their work has guided generations of programmers and researchers up to the present day.”

Aho and Ullman began collaborating at Bell Labs in 1967, and worked together developing algorithms for analyzing and translating programming languages. Ullman left Bell Labs in 1969 and joined the Stanford University faculty. Aho stayed at Bell Labs for 30 years before joining the Columbia University faculty. The two researchers continued to work together for decades. They are known for their programming language theory and implementation, algorithm design and analysis, and technical contributions and influential textbooks. The foundation explained much of today’s modern programming languages owe its beginnings to the researchers.

“Aho and Ullman established bedrock ideas about algorithms, formal languages, compilers and databases, which were instrumental in the development of today’s programming and software landscape,” said Jeff Dean, Google senior fellow and senior vice president at Google AI. “They have also illustrated how these various disciplines are closely interconnected. Aho and Ullman introduced key technical concepts, including specific algorithms, that have been essential. In terms of computer science education, their textbooks have been the gold standard for training students, researchers, and practitioners.”