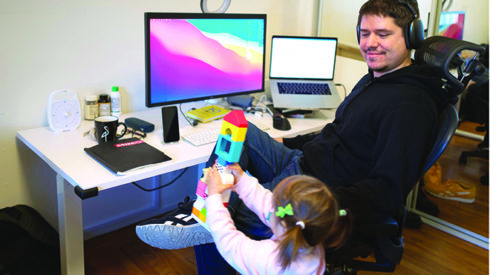 Many companies have just surpassed the one-year anniversary of sending their employees home to work remotely as a safety measure for COVID-19. At the time, many thought this might be a temporary situation and folks would return to the office after a month or so, but one year later, many workers haven’t returned to the office.

At the start, some developers struggled with remote work, while others thrived. Initial struggles included setting up and getting used to a distributed environment for the first time, feeling isolated from co-workers, and balancing work and home life — especially for those with young children when normal childcare options weren’t there or they had to help their kids with remote schooling alongside working their normal job.

Benefits included the ones normally associated with working from home: increased productivity, more free time due to not having a commute, and the convenience of not having to go anywhere.

RELATED CONTENT: How you organize your development teams matters

One year later, the benefits might have remained the same, but the negatives have compounded themselves for some. Those feeling isolated from coworkers at the start of the pandemic are now dealing with the mental toll of having been isolated not only from coworkers for a full year, but also from family and friends.

“A couple days in a month or a week, no problem, but forever? Well, that just requires a lot more intention from yourself, your team, and your coworkers,” said Anthony Tran, software engineer  at Rollbar, a company that provides a continuous improvement platform.

In fact, a survey released by Harness in August—5 months into remote working—revealed that 12% of developers were less happy in their roles than they were pre-pandemic.

There are some who either didn’t like or struggled with working from home at the start, but have changed opinions over time as they’ve gotten more used to it and experimented and figured out things that worked for them.

“During the beginning of the pandemic it was a struggle to stay motivated at home, there were so many distractions that it made it difficult work,” said Tyler Corwin, a developer at digital marketing company Figmints. “I was still able to hit all of my deadlines, but I didn’t get the same drive to get things done as I did while I was still in the office.  After the first month things got much better as my time management and organization got better.” For example, one thing he started doing was creating “fallback” tasks that he could work on while he waited on answers from his teammates on Slack or email. “This kept me working more efficiently and it’s something that I’ll continue to do even after we resume work back at the office,” Corwin said.

Corwin added that while at the start he struggled with motivation, communication with team members, and keeping his kids from running into his workspace, now that the vaccine is here, he finds himself not wanting to return to the office five days a week.

Maxime Basque, a developer at Unito, said that working remotely has been more good than bad. “While I do miss the camaraderie and things like being able to just ask something to someone directly without going the async route, as a generally anxious person I feel a lot calmer these days; not wasting 1h+ in transport every day, being able to concentrate with no distractions when I need to, having almost full control over my schedule, not having to think about lunch, etc. Eliminating the small things that caused a lot of stress were really beneficial for me,” he said.

Daniel Valdivia, an engineer at Kubernetes-native object storage company MinIO, appreciated the extra time he was able to spend with his family. “As the father of a 2-year-old, it has been awesome to get as much time as I have had with my child at such a young age.”

Sachin Goyal, a principal engineer at Rollbar, also has had mostly positive experiences with working remotely. “I was able to use my time much more efficiently. Cutting down commute, lunch, and room-hopping is a huge time saver. Apart from that, I spent much more time with my 2-year-old and my wife,” he said. The one complaint he has, like many, is not being able to see colleagues regularly.

Goyal feels that his team and manager have been very accommodating throughout this time. For example, since his daughter’s daycare is closed, he and his wife plan their day and meetings around making sure one of them is always with their daughter, and his company allowed him to have a more flexible schedule. “The ability to work at flexible hours is a huge benefit for me. Open communication was really helpful. Clearly stating the accommodations I wanted from my team and my manager and working with them to create a win-win was actually a ‘win’ for all us,” Goyal said.

Tran also noted that his managers have put in a lot of effort in trying to make remote work a positive experience, such as having lunch meetings on working efficiently and ergonomically, Zoom hangouts with trivia, group yoga, or playing whatever the latest popular Internet game was. “Also, I’d like to emphasize being candid with my managers and coworkers at Rollbar and sharing that I was losing motivation and focus, and feeling distant from the company and team was very helpful because they related that this was a common symptom of working remote and being able to share that, we were able to put more events/meetings/activities in place to help mitigate this feeling,” Tran said.

Rico Pamplin, a lead process engineer at Lincoln Financial Group, also sees positive steps being taken by management to ensure employees are doing okay. “My manager also heavily promotes maintaining a healthy work/life balance and we have scheduled 1:1 sessions to ensure our professional requirements aren’t overstepping the personal ones.” He said that one way he ensures he’s maintaining his work/life balance is scheduling activities that require him to leave his workspace, because otherwise he’s found himself with days where he’s gotten super focused on a project and then suddenly realized it was 10 pm.

As more people get vaccinated, many companies are in the process of discussing what that means for future plans, whether that means fully reopening offices, staying fully remote, or adopting a hybrid model.

Valdivia said that for most of his career he’s been in a physical office and preferred it—because he doesn’t feel that the collaborative process of problem solving on a whiteboard translates to Zoom meetings, and in-person conversations can help build relationships that advance your career—but now has begun to rethink his views and see the value in a hybrid model. “I think it can recharge you, allow for deep work and add a few hours a week of family time without negatively impacting your productivity or the culture.”

Basque said his company, Unito, will be adopting a hybrid model once the pandemic ends, where employees will be able to work from home two to three days per week. “The company believes this will allow us to maintain our strong culture, foster collaboration, but also adapt to the new reality and new needs of the team.”

Pamplin also sees the value in a hybrid model. “Now that I’ve been remote for a while, the luster has worn off a bit, but I definitely wouldn’t want to go back to primarily working in an office. I don’t mind the cubicle setting occasionally, but to do my job effectively it’s not a necessity, especially given that most of what I do is virtual, and my team is geographically distributed.”