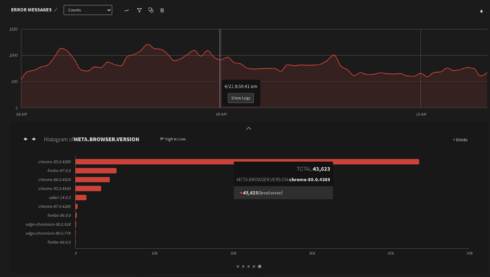 The new feature automatically captures errors and logs occurring in the user’s browser and allows dev teams to centralize those errors alongside server-side logs, according to the company.

“Customers struggle to extend their observability stack into their frontend web applications to monitor for client-side errors and collect critical debugging information,” said Peter Cho, the vice president of product, LogDNA. “LogDNA Browser Logger makes it quick and painless to find and fix issues that span between frontend and backend applications so developers can spend less time debugging and more time on value-adding tasks.”

The biggest change in Rust 1.52.0 version according to the developer behind the language is enhanced tooling support for Clippy.

Previously, running ‘cargo check’ followed by ‘cargo clippy’ wouldn’t actually run Clippy, and the issue has since been fixed, meaning that users can get the expected behavior regardless of the order in which they run the commands.

Additional details on the stabilized APIs in this release are available here.

Google’s newly added safety section will give transparency into how apps are using data.

It now highlights whether the app has security practices like data encryption, whether it follows the Families policy, whether users have a choice in sharing it, if it’s verified by an independent third party and more.