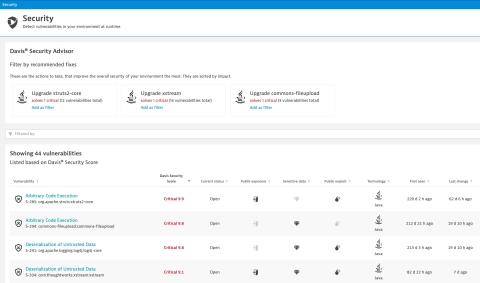 Davis automatically monitors all software libraries in preproduction and production and removes false positives. It then aggregates vulnerability data and prioritizes remediation tactics.

“Manual processes and piecemeal solutions that don’t aggregate data from across these environments force teams to waste time chasing false positives and leave organizations vulnerable to risk,” said Steve Tack, the SVP of product management at Dynatrace. “By automatically surfacing the most critical vulnerabilities and providing code-level detail and prioritization based on business impact, Dynatrace enables DevSecOps teams to work smarter, not harder, as they reduce their organizations’ risk exposure.”

The communications API platform Nylas announced that it acquired $120 million, bringing its total valuation up to $175 million.

The company said it will use the funding to invest and scale its integrated and productivity-driven API solution that will allow developers to quickly connect their apps to any email, calendar or contact provider.

It will also invest in disruptive technologies that automate workflows and integrate technologies such as conversational AI/ML, sentiment analysis, NLP, OCR and cross-system intelligent automation.

Web Audio API, which enables the creation and manipulation of music sounds directly in the browser has become an official standard, according to W3C.

The Web Audio API working group already started working on Web Audio API v2, which will build on and enrich the first API with more complex and much-requested features.

“The development of the Web Audio API to the point of it becoming a W3C Recommendation represents a huge effort from developers, audio experts and audio artists across industry and academia. A major contributing factor in the success of the API has been the support from the user community who have engaged with the spec and developed some incredible work”, said Matthew Paradis, the Audio WG co-chair.

Additional details on the API are available here.


The Linux Foundation today announced a new training course and new software tools to accelerate the adoption of Software Bill of Materials (SBOMs).

The new course Generating a Software Bill of Materials provides foundational knowledge about the options and the tools available for generating SBOMs and how to use them to improve cybersecurity.