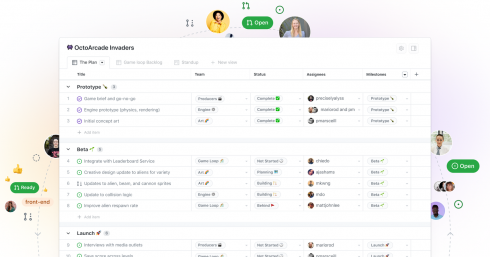 GitHub announced new beta features within GitHub issues to connect planning directly to the work teams are doing and to flexibly adapt to their needs whether that’s through project tables that are built like spreadsheets, custom fields, a keyboard-driven command palette, improved task lists and issue forms.

“Often, we find ourselves creating a spreadsheet or pulling out a notepad, just to have the freedom to think. But then our planning is disconnected from where the work happens and quickly goes stale,” Mario Rodriguez, the vice president of product at GitHub wrote in a blog post.

CodeGuru Reviewer helps with identifying detect potential defects and bugs that are hard to find in your Java and Python applications, using the AWS Management Console, AWS SDKs and the AWS CLI.

Brave Search beta is now available in the Brave browser, which is built on a completely independent index, and doesn’t track users, their searches or their clicks.

Brave Search is now available in beta on all Brave browsers as one of the search options alongside other search engines. It will also become the default search in the Brave browser later this year.

“Unlike older search engines that track and profile users, and newer search engines that are mostly a skin on older engines and don’t have their own indexes, Brave Search offers a new way to get relevant results with a community-powered index, while guaranteeing privacy,” said Brendan Eich, the CEO and co-founder of Brave. “Brave Search fills a clear void in the market today as millions of people have lost trust in the surveillance economy and actively seek solutions to be in control of their data.”

Mozilla and Princeton team up on Mozilla Rally

Mozilla teamed up with Princeton University to announce their new platform, Mozilla Rally. According to Mozilla, the platform puts users in control of their data in a way that allows them the choice to contribute their browsing history to crowdfund projects. The goal here is to give users the power to control their online experience.

As part of the announcement, Mozilla also launched the new Rally research initiative in collaboration with Professor Johnathan Mayer’s research group at Princeton University. According to Mozilla, the primary goal of this initiative is to hold major online providers accountable for the data they collect from users without their permission.

Alongside this, Mozilla announced that they are releasing a new Toolkit, WebScience. According to Mozilla, the Toolkit focuses on data minimization, a core aspect of how the Rally Platform plans to respect users and their data. This Toolkit is another result of the company’s collaboration with Johnathan Mayer as he and his team developed the software that is now maintained in collaboration with Mozilla.

Additional details on the fixes in CLR, Windows Forms and WPF in the new version are available here.