End of the Line For Stack Overflow Jobs

Stack Overflow, which is now owned by Prosus, has announced the “sunsetting” of Stack Overflow Jobs and Developer Stories. This decision, which hasn’t been widely reported, isn’t welcomed by developers.

The news of the impending closure of Stock Overflow’s entire Talent & Jobs features, together with a timetable for it to happen, was announced on January 13th, but yesterday, February 1st, when the deprecation notice appeared on the Stack Overflow Jobs, was the first time many of the community were aware of it:

The post Sunsetting Jobs & Developer Story came from Puneet Mulchandani, Director of Product for Reach & Relevance teams and the person whose remit includes Stack Overflow Jobs and Developer Story. Despite appearing as a normal starting point of a Q&A this post was very clear cut, stating:

The following features will be discontinued and removed from the site by March 31, 2022:

What changes are we making?

What can you expect in the coming months?

The discussion below this post is still ongoing and makes it very clear that developers do not want any of this this to happen.

From the perspective of most developers, Stack Overflow Jobs is a well-established and very popular destination trusted by both sides of the employment equation – developers looking for new opportunities and hiring managers looking for suitably qualified candidates. 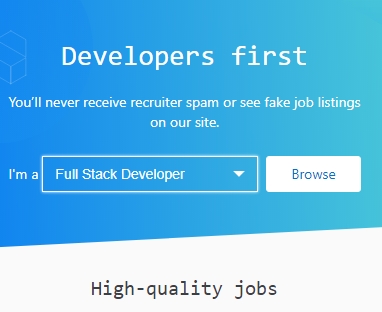 While the jobs board dates from around 2012, the Developer Story feature was only introduced in 2016 as a easier way to set out a developer’s “selling points” and to be shown personalized recommendations. It has proved popular with developers as an alternative to the traditional resume or CV. The Salary Calculator is even more recent. Based on information from in that year’s Developer Survey, it was introduced in 2017 when we described it as:

a useful tool if you want to explore the range of potential salaries for the kind of work you do given your skills, education and experience.

It has been updated once, after the 2019 Developer Survey, but although subsequent surveys collected salary information the calculator has been unchanged since then.

In his post Mulchandani tried to explain why Stack Ovewrflow is taking this unpopular course of action, writing:

“As we considered the next stage of growth for us as a company, we went back to product fundamentals and asked ourselves: how can we leverage our unique position to solve real, meaningful problems for our users and customers?

While Talent & Jobs helped us get to where we are over the past decade, the talent acquisition space is not one where we have a strong competitive advantage. Developers, as you all know, don’t have a hard time finding job opportunities. The problem is often finding the right opportunity and job boards and sourcing are ineffective solutions. The effort it would take us to truly differentiate in this space is not one we could justify.”

He also points to the fact that the writing has been on the wall since April 2021 when CEO Prashanth Chandrasekar wrote in a blog post:

We are realigning the Talent business to focus more on customer employer branding and company awareness needs, and moving away from job slots and direct hiring. This will tie the product closer to what we offer through Stack Overflow Advertising and is part of what we’re calling our “Reach and Relevance” strategy, allowing companies to reach and share relevant information with millions of developers and technologists. At the end of the day, this change unlocks greater value for our users and helps our customers better achieve success.

At the time of writing Mulchandani’s “question” has been awarded a reputation score of -645 (and notice that this is a large negative value). The highest scoring “answer” is from Andy, a Moderator, who starts by saying:

and goes on to argue that the Salary Calculator should be preserved, and has 582 votes. The next most popular “answer” (186 votes) comes from balpha, who worked for Stack Overflow until 2019 and as a product manager worked on Developer Story and is sad to see it go. This prompted a comment, awarded 3 votes so far, from Mulchandani who notes:

Given that Stack Overflow Jobs used to be a large part of its revenue and there seems to be no direct conflict of interest between it and Stack Overflow Advertising and the nebulous “customer employer branding and company awareness needs”, personally I can’t see why this is happening. I had thought it must be something to do with Stack Overflow’s recent acquisition, and that like all new owners it was Prosus that felt the need to make sweeping changes, even if that meant axing features that are valued by its community members. However, that cannot be the case since the decision was made before the acquisition took place. It does seem the Stack Overflow simply sees this area as no longer part of its core product and as a drain on its resources.

Developer Pay According To Stack Overflow

Stack Overflow Sold for US$1.8 Billion